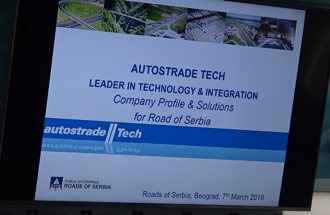 The Italian company „AISCAT SERVIZI“  with its business partner „Autostrade Tech“, separate company under Holding „Atlantia Group“, presented on March 7, 2019, at the premises of the PE „Roads of Serbia“, services available within road engineering, transport economy and toll collection system.

After ten years' follow-up of experiences of the European countries in application of satellite-based tolling, the consulting engineering company  „AISCAT SERVIZI“, as a subsidiary of the Italian Association of Motorway and Tunnel Cincessionaire Companies - „AISCAT”, has developed professional and practical skills regarding Intelligent Transport Systems (ITS) in road network management, toll collection and road traffic safety.

„The benefits of satellite-based tolling system are precise monitoring and oversight over moving vehicles, not only on national roads, but also through the majority of states which are integrated, as national operators, into such system which charges a toll for the use of roads“, said the Manager in charge of business development of the company „Autostrade Tech“, Mr. Paolo Guarnieri.

Practice has shown that the best solution for selection of toll collection system is combining and supplementing the traditional system with one based on satellites.

„Toll collection system applied in the Republic of Serbia is used on a greater number of lanes and enables free flow and passability. The satellite-based toll collection system is compatible with and  complementary to different types of systems and vehicles, but always in compliance with the standards of the European Union“, Mr. Francesco Bandinelli, Director of the Company „Autostrade Tech“, explained.

Extensive toll system via satellite is especially beneficial for heavy goods vehicles, because it enables identification of the most suitable driving route which may contribute to better control of environmental pollution. Through charging a toll for road usage, heavy goods vehicles will apart from maintenance pay also for environmental pollution.

„The PE „Roads of Serbia“ as a local national partner included in the network of European operators may have full authority in communication with end user who would have an opportunity to choose which equipment to rent. It is important that relationship between national and European system of operators is based on professional standards“, emphasized Director of the company „AISCAT SERVIZI”, Mr. Massimo Schintu.

Assistant Director of the PE „Roads of Serbia“, Mr. Slavoljub Tubić, thanked the Italian colleagues  and said that presented proposals were significant, because for the past year and within the World Bank's Project the Enterprise, and the Sector for Toll Collection as well, had been restructured . „Toll Collection on trunk roads used by truck drivers in order to avoid payment of tolls on motorways is being specifically considered. Proposals certainly demand additional studies, prepared not only by the Ministry of Construction, Transport and Infrastructure, but also by other ministries, especially that engaged in finances, and within our Enterprise, which would specifically show if application of such a toll system would be a benefit or additional levy for the transport sector“, concluded Mr. Tubić.